Notice: The called constructor method for WP_Widget in dc_jqslickcontact_widget is deprecated since version 4.3.0! Use instead. in /home/trg8wu0emdmj/public_html/wp-includes/functions.php on line 4722
 Beautiful Edibles – Agate Beach House 
Deprecated: Non-static method dc_jqslickcontact::get_plugin_directory() should not be called statically, assuming $this from incompatible context in /home/trg8wu0emdmj/public_html/wp-content/plugins/slick-contact-forms/inc/dcwp_admin.php on line 569

Deprecated: Non-static method dc_jqslickcontact::get_plugin_directory() should not be called statically, assuming $this from incompatible context in /home/trg8wu0emdmj/public_html/wp-content/plugins/slick-contact-forms/inc/dcwp_admin.php on line 571

The garden surrounding Agate Beach House has been planted with a variety of mostly native shrubs, trees, fruits and vegetables. The artichokes come up every year, with the bulbs growing to maturity sometime in August. If left to blossom, the bulbs transform into a beautiful purple ‘thistley’ flower.

In addition to traditional artichokes, we grow Jerusalem Artichokes which sprout tall sunflower-like flowers in the late summer. These striking plants also come back year after year along the lower water side garden.

Unfortunately we don’t have room to grow enough artichokes to serve for meals.  However, from Spring to Autumn, there is a market stall near the intersection of WA-3 and Agate Road (less than 5 miles away) which sells huge, delicious artichokes (along with a wide range of fresh produce and locally foraged foods such as mushrooms and berries).

Here how we prepare artichokes for grilling:  Cut artichoke in half, remove tough lower leaves (and cut the sharp edges off leaves – this is easily done with  kitchen shears), boil in salted water for about 30 minutes. Remove from water and drain.  Gently scrape out the fibrous ‘choke’ at the core of the bulb,  rub with lemon, drizzle with olive oil, season with salt and grill until they reach charred, delicious perfection!).

Agate Beach House’s kitchen is well stocked with everything needed including kitchen shears, a stock pot, kitchen tongs and collanders, a wooden cutting board and cookie sheets – for bringing the artichokes to and from the grill on the deck. We also have basting brushes so that you can evenly apply olive oil to the artichokes before grilling. There is also a blender, for those who aspire to make homemade garlic aioli as a dip for the artichoke.

We hope that Agate Beach House guests enjoy the artichokes in the garden (and from the market stand) as much as we do! 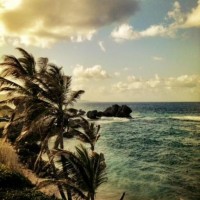